Home > Blog > The History of the Fax Machine & What’s Next?

The History of the Fax Machine & What’s Next?

Nowadays, fax machines aren’t an integral part of businesses as they once were. However, their history is rich and they still get used in today’s, more modern, world than you may think.

They’ve been around for hundreds of years, which is a fact that many people are surprised to hear. Furthermore, fax machines are still being used across companies around the world. They’re an ancient machine that are still going strong in ways that you may not even realize. 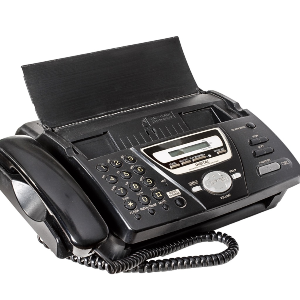 Fax machines have been around since 1843, however, they weren’t used in the traditional way that we think of fax machines being used now.

The history behind fax machines show different versions over the years that they’ve been in existence. Although, the main purpose for using them has been the same since 1843 as it is today.

Using fax machines involves sending material from one place to another location, regardless of whether it be via the telephone or electronics.

When the first fax machine was made in 1843, it didn’t quite catch on as well as you may expect. It simply wasn’t able to have messages sent across fast enough. Alexander Bain was the person who created the Electric Printing Telegraph, also known as the very first fax machine.

This is the first time anyone had attempted using signals that are electronic to have documents read and printed in different areas. Alexander tried selling his new invention to companies across London as a way to help them carry out business more efficiently.

However, they weren’t quite ready to receive that kind of technology and the invention was widely rejected. Looking back on it, the Electric Printing Telegraph was probably too ahead of its time.

The technology used in the Electric Printing Telegraph became a source of inspiration for other inventors. Years later, in 1880, the Scanning Phototelegraph was invented by Shelford Bidwell.

At this period in time, businesses still didn’t see the need to have images and text transferred to other locations with such speed.

The next notable development in the fax machine came in 1888 by Elisha Gray. She created the Telautograph in the U.S. and it became the first machine to be able to have complicated shapes replicated and sent.

This meant that people were able to write signatures and have them copied and sent elsewhere at high speeds. It was a bigger development that enabled businesses to make more use out of faxing.

In 1908, Arthur Korn made the Bildetelegraph which enabled people to have wanted posters shared internationally. This became a big asset for police departments looking for suspects who may have escaped into different countries.

This was a huge development in fax machines that showed the world that it wasn’t just a fun gimmick. Faxing could be used as a serious asset for police departments to spread the word about wanted people via posters.

1924 was the year when AT&T made a breakthrough that allowed 15 photos to be sent from Cleveland to New York. People were astonished at how all of the photos could be seen in high-quality.

The technology used in 1924 was at the stage where people were able to rely on it more compared to the previous renditions of the fax machines.

Over 20 years later, in 1948, the first fax machine was made that could be used in office spaces. Western Union made the Deskfax which became the start of companies around the world implementing fax machines into their offices.

One of the main reasons for this was because the fax machines were small enough for people to put on their desks.

In 1964, Xerox Corporation came in and changed the traditional electrical wiring system of fax machines and put them onto a telephone system. They then created the Long Distance Xerography (LDX) which was patented.

A couple years later, Xerox Corporation made developments to their LDX system and created the Magnafax Telecopier. It was light and was able to receive and send documents that were easy to read within 6 minutes.

These Magnafax Telecopier developments were tweaked over the 70’s and 80’s but it generally remained the same. Hank Magnuski then made a great advancement in fax machines by coming up with an interface over the computer that could be used with fax machines. It was known as GammaFax and ended up becoming the standard for fax machines globally.

New employees coming into the workforce aren’t as familiar with using fax machines, and many companies don’t use them as an integral part of their daily tasks. However, the principles behind fax machines are still used in businesses everywhere.

People check their emails and are more likely to send and receive information that way. However, there are some companies that have an InternetFax policy that comes with their VoIP phone services as a way to still receive and send faxes through a telephone system that’s more secure.

What’s Next for Fax Machines?

Faxing is something that’s going to still be used among certain industries for a while. For example, legal or medical firms looking to send and receive more sensitive information may opt for faxing as it can be more secure.

While many people were under the assumption that faxing was an extinct practice, it’s still being used all around the globe today. It’s unlikely to go anywhere, but it’s likely to continue undergoing transformations over the years.