Update: Staying connected with MagicJack has come a long way since its promising debut in 2007-08. Back then, magicJack provided a highly economical and portable alternative to traditional phone, which still remains a major draw to date. Below you are introduced to the next generation, a magicJack for cell phone.

The evolution of smartphones, long distance calling cards and smartly packaged phone plans however, threw up fresh challenges of portability, easy setup and low-cost operations for the leading VoIP applications of recent times. To its credit, MagicJack helped by responding well, and its smartphone app opened up wider opportunities to render features for the company.

The original app, released with the Plus device was named FREE Calls, leveraging the signature feature with a conspicuous “Talk Free” icon in green background. While designers were left a touch cold with the flat, 2-D look – user survey metrics from Coremetrics and GoMez showed a high degree of appreciation from users who appreciated the call clarity, purpose, and free use of the app. While our review showed the new app has catered to their largest user-base of all Samsung, Android and iOS iPhone users (including Tablet users), it doesn’t have support for Windows OS and Blackberry platforms yet. That, however, is set to change soon with extensive upgrade plans included for next generation of devices (magicJack GO and magicJack EXPRESS). 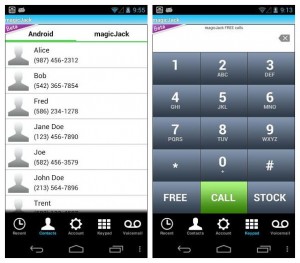 True to its brand identity, the magicJack Go App boasts of some arresting features:

Isn’t all rosy though. Like any app in development and beta-testing mode, the MagicApp still has some rough edges around its corners. While the quarterly conferences promise of further advancements, there are couple of features which could do with some attention:

Our reviews showed that it isn’t all rosy though. Like any app in development and beta-testing mode, the MagicApp still has some rough edges around its corners. While the quarterly conferences promise of further advancements, there are couple of features which could do with some attention:

In a nutshell, the MagicApp does take a bold step forward in extending its free calling services to the world of smartphones. The services are still a work in progress outside the major operating systems of iOS and Android but the technology, interface and call-quality are excellent thus far.

They need to add more digital features (at least texting and file transfers) as well as figure out a way to cut down international calling incoming charges further, particularly for users outside U.S., Puerto Rico, Virgin Islands and Canada, but that shouldn’t take away from a solid debut.

Overview of the soon to be released magicJack App

If you have been interested in saving money on your cell phone bill then perhaps the new magicJack App, tabbed magicApp is for you. Previous versions of the device have either had their shortcomings or don’t provide quite the convenience that an App could.

The original device requires a computer, which often creates unfixable functionality problems due to differences in individual computers. In order to combat this issues the company developed the magicJack plus which takes things a step further by allowing direct connect from a router/modem to a regular telephone. A great advancement but one that still requires a landline telephone, and a home ridden phone line.

In taking things a step further in the products evolution they are soon coming out with the App. With the App you will get all of the benefits of magic Jack while being able to make your calls directly from your cell phone. Imagine that, whenever you are on Wi-Fi/ 3G/4G/high-speed LTE you will have unlimited minutes through your the App, from you smartphone all for one very low price.

And believe it or not but the deal gets even sweeter! Initial reports are saying that the App and calls will be free if you are already a magicJack user and are simply making calls to other users. However if are a current customer and want to make calls to landlines and mobile numbers you will have to pay a small $10 licensing fee. If you are a new user you will have to pay the standard $40 for the first year of service with all future years costing just $20 each.

The magicJack plus is suppose to be released in early July with reports stating that the magicApp should be released at or near the same time. The initial release is only expected to cover computers, all iOS device including iPhones and Ipads with an Android, Windows Phone and Blackberry compatible App coming soon thereafter.

After 5 plus years of fighting the magic app for Android phone not ringing issue, it may be time to dump the whole thing and just strictly use my cell phone and also drop my MJ Go which always had tons of background noise. Yeah, changed power supplies with good ones and Inet is 150 mbits.

by Jamy Welch on TheVoIPHub
New app NOT user friendly

I hate the new app, it’s very hard to use

by Mike on TheVoIPHub
Disappointed

I just downloaded and installed the "upgrade" on my iPhone 7. The old version allowed me to make 7-digit phone calls. Now I'm forced to call the neighbor with a 10-digit number. That's not the phone system enforcing that rule, it's magicapp. I can't seem to shut that rule off. Otherwise I have been using this product for years and it is a wonderful alternative to the phone company offerings.

by Steve on TheVoIPHub
Just installed - good but a suggestion.

So, a suggested improvement for the app would be for us to be able to select a ringtone so that without having to look at the screen I will know if the call is coming in to my MJ phone or directly to the cell phone.

by Darin on TheVoIPHub
I Have Got To Say, It's Great So Far

I am a new user of the magicJack app and I have got to say it’s great so far. I have made several calls with no problems and the clarity is great. I understand that not all products work perfectly all the time and I may encounter problems in the future. That said, at basically a dollar sixty seven a month for phone service is pretty darn good. I have better connections and better quality calls with it than I do with my $180 a month mobile service with AT&T. So if there are dropped calls or bad connections once in a while, it won’t bother me too much. I get that everyday with AT&T!

by DJ on TheVoIPHub
Works Well Even Without A Landline Phone

I have been using the Magictalk web application and then magicJack App with a air card on my laptop and have had excellent results. We no longer have a phone line at home and go on extended RV trips multiple times a year. I am always on the laptop and the wife is always on the cellphone with her family, so I can receive and place calls without paying for a extra cellphone and a family plan (every little bit of savings helps). I am running windows 7 and it took about 5 mins to download, install and run. To be honest, I was surprised.

Nobody can tell that I am talking through the laptop or through a VoIP app and my aircard signal has been as low as 47% in some remote areas! It has voicemail and call forwarding too!

I have used the magicJack App for awhile now and I have yet to have a dropped call. It has gotten better (much better) with call quality over the years. I do not have a land line just my cell and the app is perfect on my wifi connection. I will buy newer devices once they are out in order to get access to their newer apps if needs be! I have saved $500.00 a year over the past 4 years. That's a total of $2,000.00!! Thank you magicJack